BMW might be expecting a quarter of all 3-series buyers to opt for the new 330e plug-in hybrid, but will they simply choose it for tax purposes, or because it’s a genuinely exciting addition to the range? Well, there are two new reasons why it out to be the latter: There’s a new XtraBoost feature that ramps the combined power output up to 289bhp for short periods, plus, the electric-only driving range has increased by 50%…

But is this going to be a conscious decision made by buyers? Keep reading for our full review of the BMW 330e hybrid.

By combining the same 2.0-litre, four-cylinder turbo petrol engine you’ll find in the regular 320i with an electric motor that’s neatly integrated into the eight-speed Steptronic automatic gearbox.

The packaging is so good that the casing is just 15mm longer, compared with the standard eight-speed auto fitted elsewhere in the 3-series range. Having the motor in this position is great for efficiency, too – particularly when it comes to brake-energy regeneration.

The petrol engine provides 181bhp and 221lb ft, while the electric motor gives up to 111bhp and an instant 195lb ft – although as is usually the case with hybrid systems, you can’t just add those two figures together to get the car’s total power output.

Rather, the 330e’s official max figure is 249bhp without resorting to the cringingly named XtraBoost function. Combined system torque is 310lb ft.

How does the XtraBoost work?

We were hoping for a nitrous-style button – similar to Porsche’s Sport Response. But in fact it’s just an additional element of the BMW’s Sport driving mode settings, and is activated selecting this and then stamping on the accelerator.

Thus it’s also fired up by kickdown in the S or M transmission settings.

However, because the jump to 289bhp is delivered entirely by jolting an extra 40bhp out of the electric motor, the response is quite impressive.

So much so, BMW reckons that from 12mph it’ll give you twice the ‘vigour’ of a similarly powerful conventional car within a second – and after three seconds you’ll be a full car length ahead.

Exactly the sort of performance environmentally conscious BMW buyers are probably looking for, then.

What other BMW electric cars are there?

So, it works well?

In accelerative terms, absolutely. Give the right pedal the stomping it fully deserves, and the 330e is like a rabbit with a lurcher on its back – it squirts off with real determination to get to the next turn before everything behind it.

Being a BMW, it also has the chassis chops to carry that initial acceleration into the corners without sailing into the scenery. Or getting its head bitten off.

On paper, 0-62mph takes 5.9sec, but that doesn’t quite do the in-motion effort justice. Out on the autobahn it seems to build speed quicker than the 330d we’d driven earlier in the day – although that was a Touring, so carrying more body weight than an equivalent saloon.

Still, though the XtraBoost effect only lasts for 10 seconds a time, it is available even if you’ve already rinsed the main hybrid batteries of all their electric driving range. Plus, how often do you accelerate for more than 10 seconds at a time?

Hard not to be impressed. It’s now able to drive up to 41 miles on electric power alone, and there are an increased number of options to make the most of this e-efficiency.

For instance, you can set a guide percentage of battery life you’d like to retain – should you wish to save the e-power for when you’re in a low emissions zone or trying to creep up the drive without waking the neighbours – and the car will do its best to manage this on your behalf.

Our initial results with this were mixed (basically, booting it all the time will inevitably still drain the batteries – shock, horror), but there is also an automatic setting, which works with the sat-nav guidance to choose the most appropriate points on your route to deploy the electricity.

In addition, you can manually activate full electric mode, and this will happily carry the car right up to 87mph and cruise there until the remaining range runs out.

Don’t expect to drive 40 miles on electricity at that speed, though. 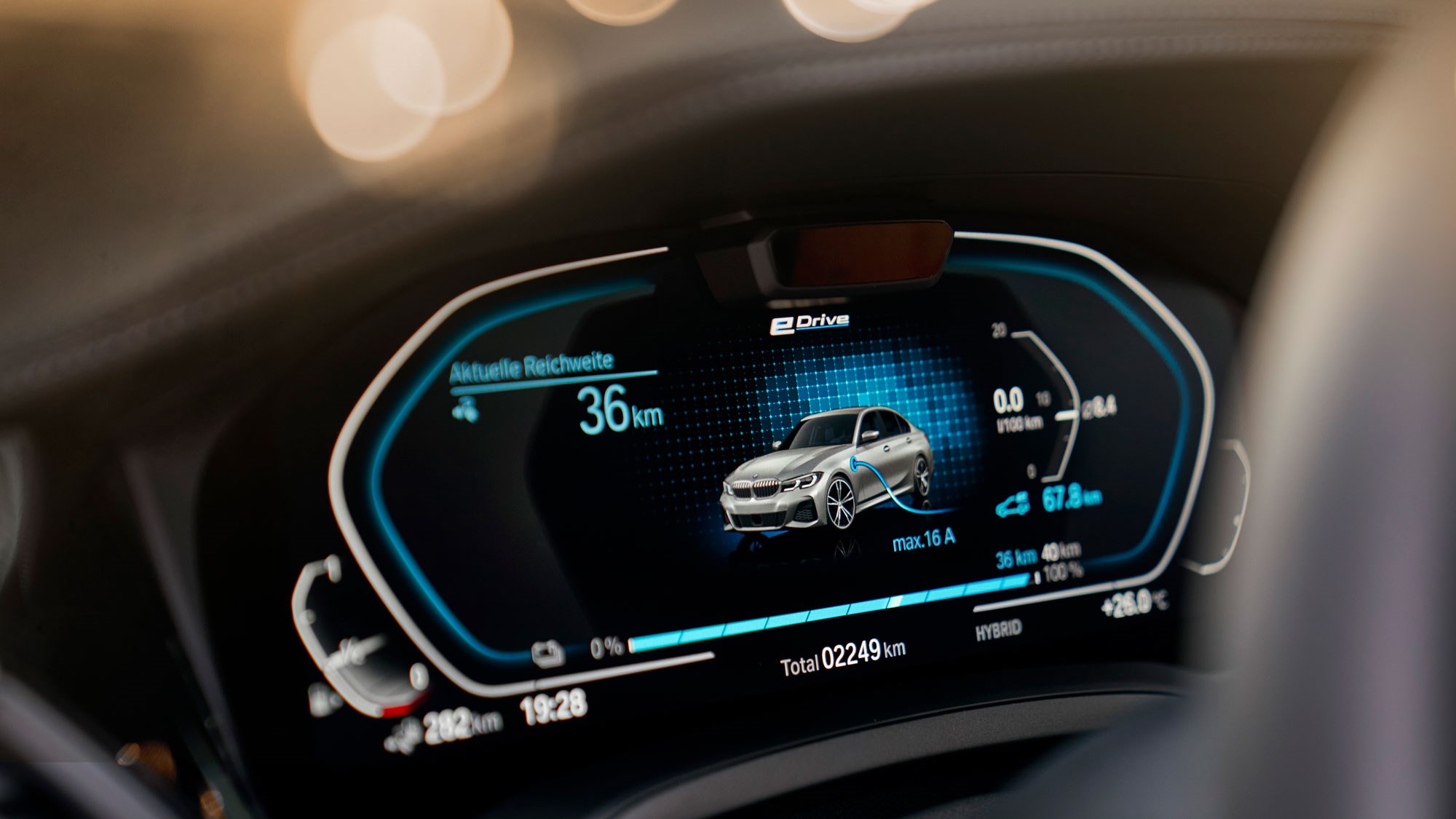 So far, so good – what’s the catch here?

Ah. The catch is that despite the performance, the 330e just isn’t that much fun to drive.

Sure, it’s certainly quick. But the four-cylinder engine sounds like it’s straining for relief when you wind it up – with or without the extra-dynamic acoustics activated in the Sport settings – and something has happened to the athleticism of the chassis, presumably as a result of accommodating the hybrid batteries.

Don’t get us wrong – this is still a car that will swallow a series of bends without blinking, and comes back hungry for more. It’s just that a little of the joy has gone missing from the process, as exhibited by the slightly light and artificial feel to the steering (again, even in the heaviest Sport setting), and a stuttering chop when laterally loading the suspension.

This, despite the test car being fitted with the most sophisticated M Adaptive set-up available in the latest 3er.

As a result, it’s fast but it’s not especially satisfying – at least not in the way one of the big ICE models can be.

The boot space has suffered – and noticeably so, as you’ll find the floor is humped when you go to throw in your luggage.

The hump is actually the fuel tank, which has been moved from its usual position under the seats to make room for the batteries; the batteries take this prime position as they’re heavier…

Putting a number on the impact of this, a standard 3-series saloon has 480 litres of boot space, while the 330e has just 375 litres. Ouch. 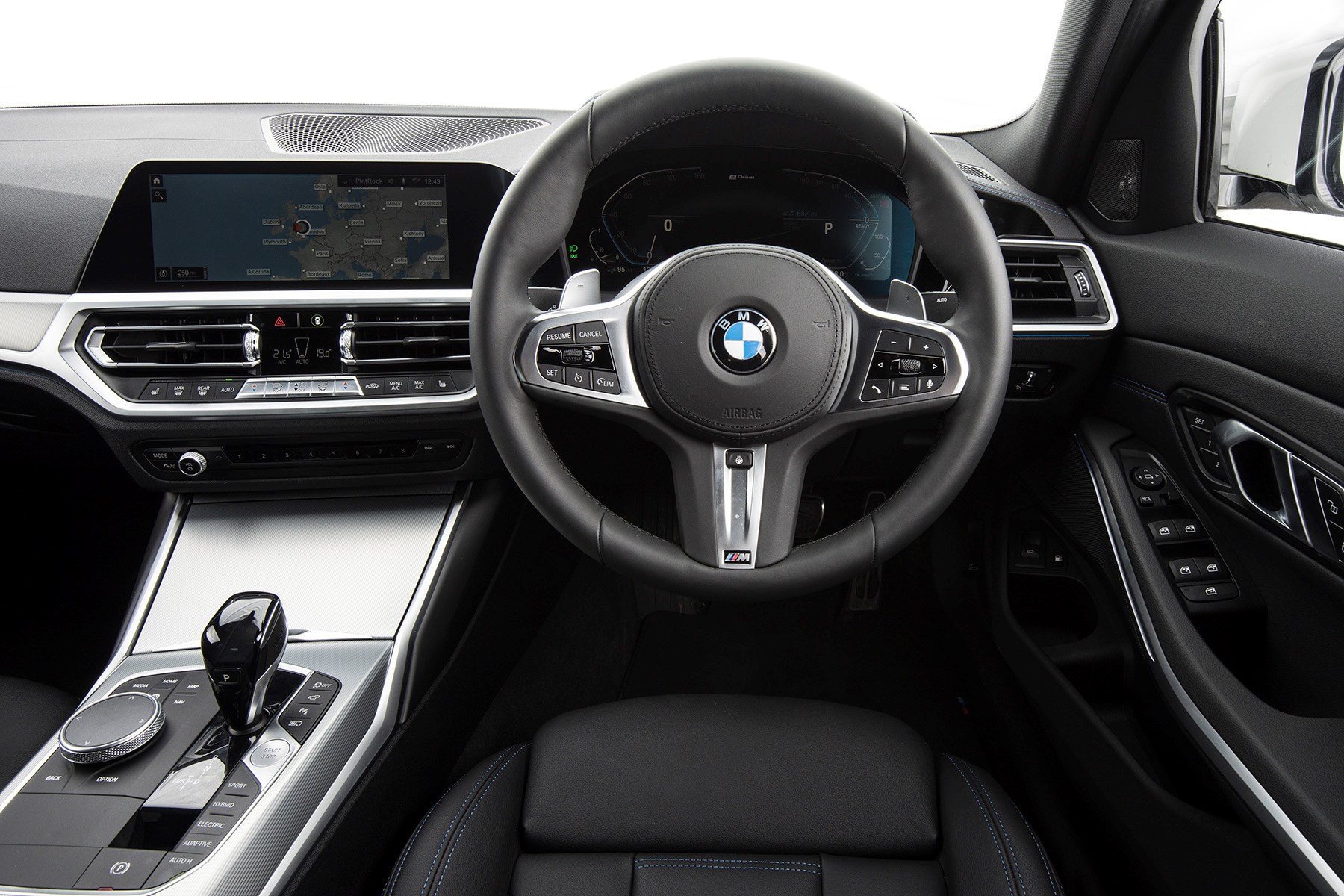 The infotainment systems and digital dials gain some new hybrid-related display options, but aside from rearranging a few of the buttons on the centre console, this is the only difference in the passenger compartment.

As with the standard car, quality is right up there, but the interior design has arguably become a little too generic, and despite the size of the screens available, remains rather cluttered.

The 330e is available in SE, Sport and M Sport specification, just like the rest of the UK range.

What about fuel economy and charging times?

Typical PHEV eyebrows-into-orbit stuff here – the official fuel economy for the 330e is a claimed 138mpg, with CO2 emissions of 39g/km (that’s 10% less CO2 than the last version).

You’ll need to be using the electric power a lot and mostly doing short journeys to get close to those figures, however.

You’ll also need to plug the hybrid part into the mains as many times as possible in between journeys; a full charge takes 3h 25m using a BMW i Wallbox, or 5h 40m using a plain old three-pin plug.

The word that springs most readily to mind here is ‘impressive’ – BMW’s new plug-in hybrid certainly doesn’t fall down as a box-ticking exercise, with plentiful performance, extended electric range and some clever new tricks.

But to say that it didn’t leave us wanting more works both ways. While the new 330e does the whole PHEV thing perfectly well, it still isn’t the kind of car that gets under your skin. This is well thought-out and even enjoyable tool, rather than the kind of genuinely emotional experience a really outstanding BMW can be.