Where the funky, early-adopter BMW i3 wore its EV heart on its sleeve, just as Tesla’s disrupter Model X screams fresh thinking from its crazy doors to its giant iPad interface, Mercedes-Benz’s EQC is an under-the-radar EV revolutionary.

Bar some questionable (and, thankfully optional) blue detailing and the lack of an exhaust, it looks normal. If we told you it was merely a facelift of the GLC – the SUV range it’s based on – you’d believe it.

On the inside there’s no innovative packaging or EV minimalism, just a snug and well built Mercedes cockpit. Here there’s greater differentiation from the GLC, although it’s instantly recognisable as Mercedes, with a slab of dual-screen glitz forming the main dashboard.

Jump in, push the start button, prod the thing into drive and, bar some whirring and the fact that the car’s rich seam of drive is entirely step-less, you’d even be forgiven for thinking the EQC wasn’t even electric. So, the EQC is not radical. But is it any good?

All you need to know about the new EQC

Indeed not and, like many of its rivals, the EQC’s power, torque and all-wheel-drive (one motor per axle) configuration do a great job of masking its huge weight (nearly two and a half tonnes, of which a quarter is the underfloor slab of battery). In city driving its effortless acceleration and impressive refinement are a pleasure, but it’s on the open road that the Mercedes really impresses. Overtakes are the work of moments and noise and vibration are so well suppressed they’re virtually eliminated (the front motor unit is rubber-mounted twice, both with its subframe and then between the subframe and monocoque).

The EQC’s turn of speed is a result of its juicy 80kWh battery (lovingly cooled and warmed as required by the car’s systems) and the two motors, the front tuned for efficiency and the rear for performance. The car constantly juggles power flow between the two, being front-wheel drive much of the time but managing to feel rear-driven.

But all this technology comes at a price – £66k for this 400 model in base trim (up to £80k, though less expensive, less powerful versions will arrive next year), and the aforementioned kerb weight. What’s more, the EQC shares a platform with more conventional Mercs like the E-Class and GLC: great news for Mercedes’ production flexibility (the car’s built on the same production line, meaning numbers can be scaled up or down as required) but the compromises bring a weight penalty of at least 150kg.

259 miles (WLTP) compares with the Merc’s two direct rivals, the Audi and the Jaguar, and of course the actual range will depend on your usage, particularly ambient temperature and driving style. But Mercedes has put a lot of work into easing range anxiety. The driver’s display clearly communicates your real time consumption and remaining range, while a number of drive modes mean that, if you’re starting to fret, you can head for Max Range. Choose it, and hold the right shift paddle (now responsible for cycling through the EQC’s five levels of regenerative braking) for D auto, and the EQC will now work to maximise its efficiency and yours, urging you to back off when, via nav data and traffic sign recognition, it calculates that any more throttle will simply go to waste. 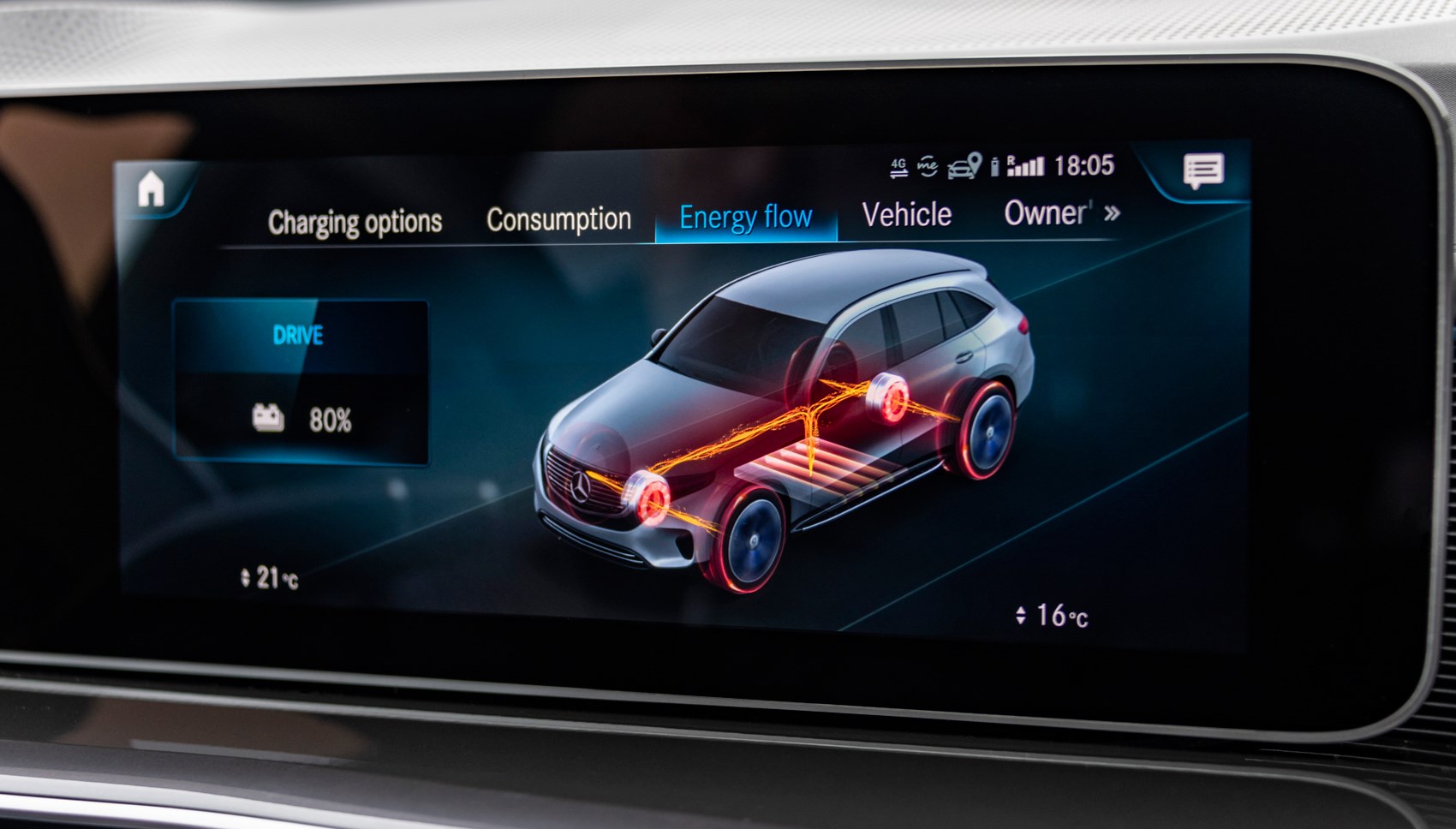 With certain limits it also tweaks the level of regen, working to charge where it can but freewheel if it’s more efficient to simply carry the speed. Clever stuff. The car’s nav also plans routes around tactical charger stops; Mercedes claims 80% of charge companies are signed up, so appear on its nav and can be paid via your EQ card or Mercedes me app. Plus, owners who do run completely flat will be recovered to the nearest charger.

Those five levels of regen are nicely judged. Change nothing and it behaves like a normal car. Click right a couple of times and it’ll coast for miles. Click left and the driving experience becomes one-pedal. Clicking between them soon becomes second nature, upping the regen as you wind your way down a mountain road, for example.

You’d think so since there’s no engine or gearbox to find room for but not so much. The boot’s big and the EQC’s hardly claustrophobic, but there’s little packaging magic here. In fact, the cockpit architecture is almost cosy – no bad thing, but it’s an approach in stark contrast to Tesla’s roomy minimalism. 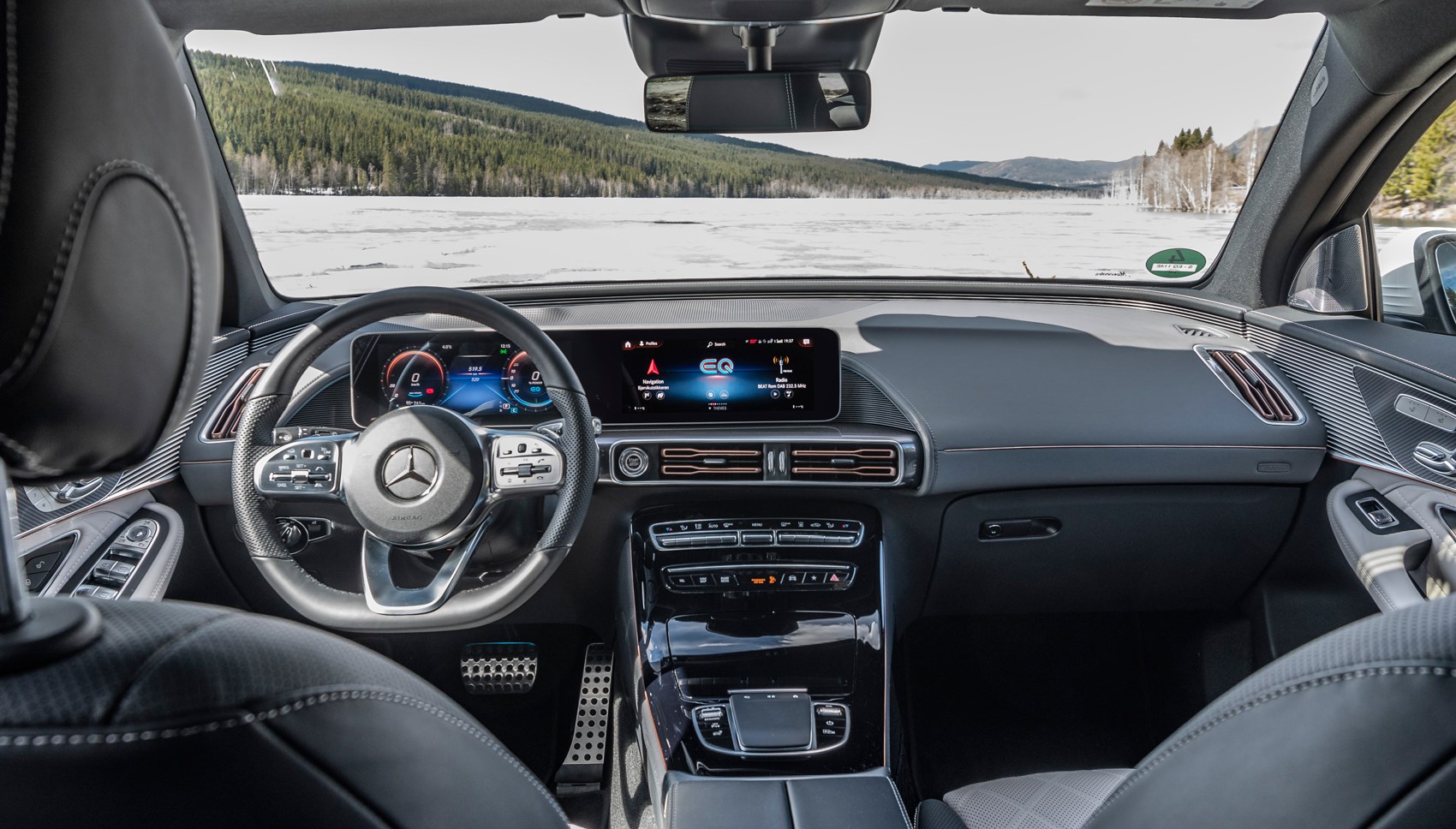 The interior fit and finish is extremely good (a metric on which Tesla disappoints) and, if you fork out for one of the higher spec levels and the £1695 Driving Assistance Package Plus bundle, the EQC’s armed with a raft of labour-saving and safety-boosting tech like active cruise, active steering assist, active braking assist and evasive steering assist.

‘Fun’ would be pushing it. The Tesla Model 3 and Jaguar i-Pace respond to being driven keenly, while the EQC merely puts up with it until you decide to slow down. It’s heavy, you sit high, the steering’s numb and there’s no clever anti-roll control, all of which mean this isn’t a car in which to get too carried away. 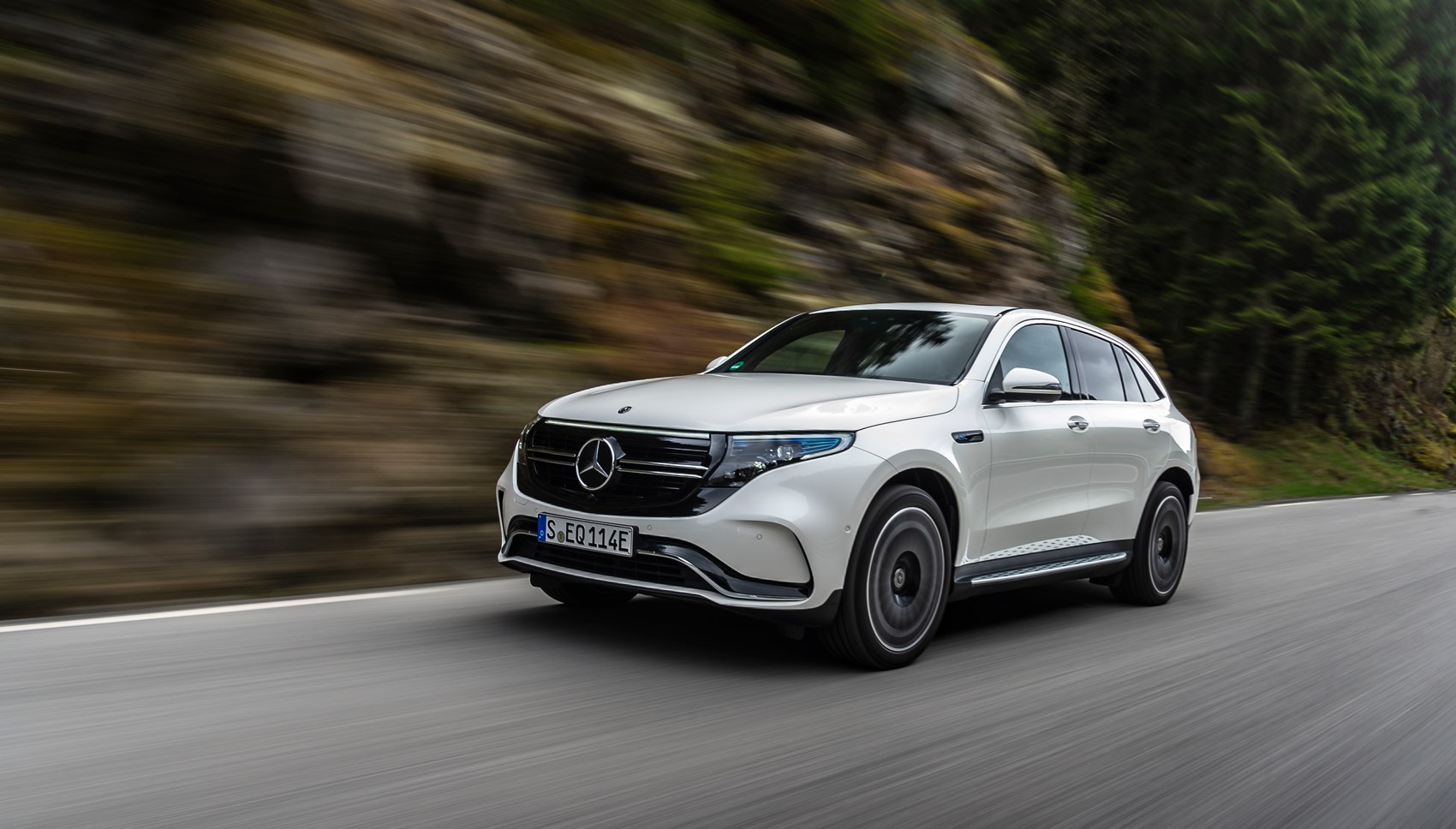 But visibility is good, epic torque ever-present and there’s sack-loads of grip, making for a swift and hassle-free ally across hundreds of miles of real road in all weathers. And if that sounds like the kind of praise levelled at many of Mercedes’ cars over time, that’s no coincidence. After all, while the EQC might be electric, it’s a Mercedes first and foremost.

The EQC isn’t as boldly innovative as an i-Pace or Model X but that doesn’t change the fact that it’s a very good car. What’s more, it feels tailormade for buyers keen to go electric but worried about the switchover.

In every detail, from the way it drives through to the comprehensive aftersales package, the EQC is like a giant comfort blanket painstakingly crafted to allay your every EV fear. Such peace of mind doesn’t come cheap, of course, but who better to take the electric plunge with than the car maker that’s been around as long as the car itself?

I enjoy sharing my passion for the automotive car with love and also reading books about Cars, Racing, and the Automotive Hobby.