The Ferrari SF90 Stradale is a 1000bhp mid-engined supercar. So far, so good.

But it’s also a four-wheel drive plug-in hybrid. Is it a case over tech over talent? Thrashing it on road and track might help us answer that question…

We need a name decode! What is it and where does it fit?

The SF90 was first seen in 2019 and celebrates the 90th anniversary of Ferrari’s racing arm, Scuderia Ferrari. And even leaving the tech aside, it’s a new one for Ferrari. It doesn’t replace any current or historic cars, but at £376k fits in the space between the F8 Tributo (the facelifted, upgraded 488) and hypercars like LaFerrari.

There aren’t many rivals at that price, except an Aventador…

Exactly. And while Lamborghini’s Aventador might have the fancy doors, carbon chassis and V12, in comparison it looks distinctly low on tech – and performance.

We’re over-simplifying, but imagine taking a 710bhp F8 Tributo, tuning its twin-turbo V8 to deliver another 59bhp, and then bolting on three electric motors for good measure. There’s one connected to each front wheel to allow torque vectoring, and another sandwiched between the engine and new eight-speed dual-clutch transmission. 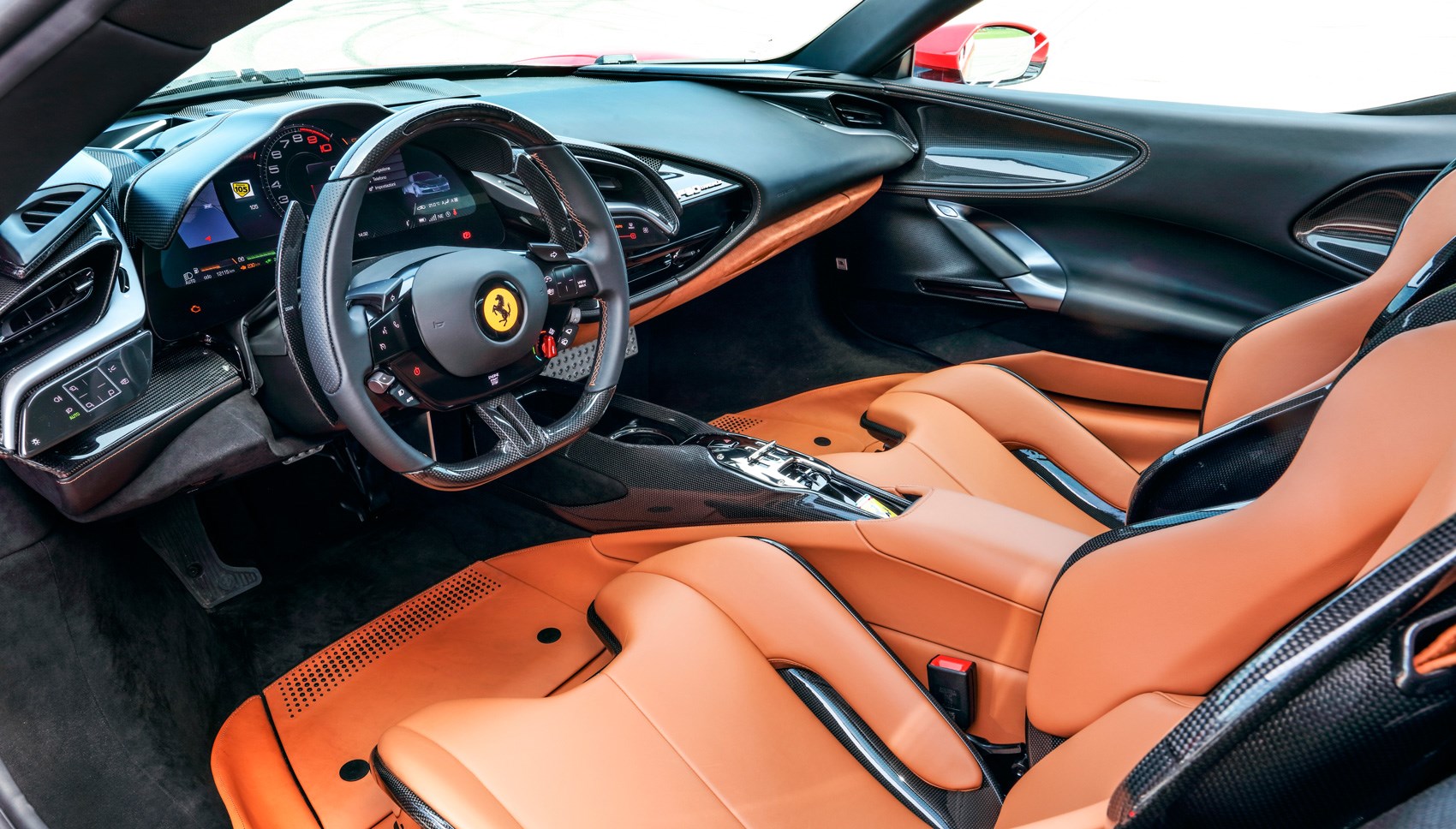 Combine that lot and you’ve got a solid 1000 metric horsepower to play with.

1000bhp! Okay, 986 Inglese bhp… I can almost imagine the thunder when you thumb that starter button and…

…nothing happens whatsoever. Unless you prime the ignition, then select Performance or Qualifying modes via the touchpad on the steering wheel, the SF90 defaults to hybrid mode. Which defaults to electric power at startup, meaning no noise.

Pull the right shift paddle, then pull out into traffic and you just get a familiar (but Leaf-familiar, not Ferrari-familiar) golf-kart electric whine. Step-off in full electric mode is surprisingly soft, and the petrol engine won’t cut in to help no matter how hard you mash the throttle. But it’ll do 84mph on volts alone, or get you a claimed 25km (15.5miles) before you need to recharge. That takes two hours when wired to a charger, or just a handful of miles if you let the engine do the juicing.

Can we get to the bit where the other 762bhp comes in?

Switch to Hybrid mode and the SF90 switches effortlessly between its power sources and spends a surprising amount of time as an EV. The integration is genuinely impressive, as is the brake feel, which is far more natural than on most hybrid or electric cars. 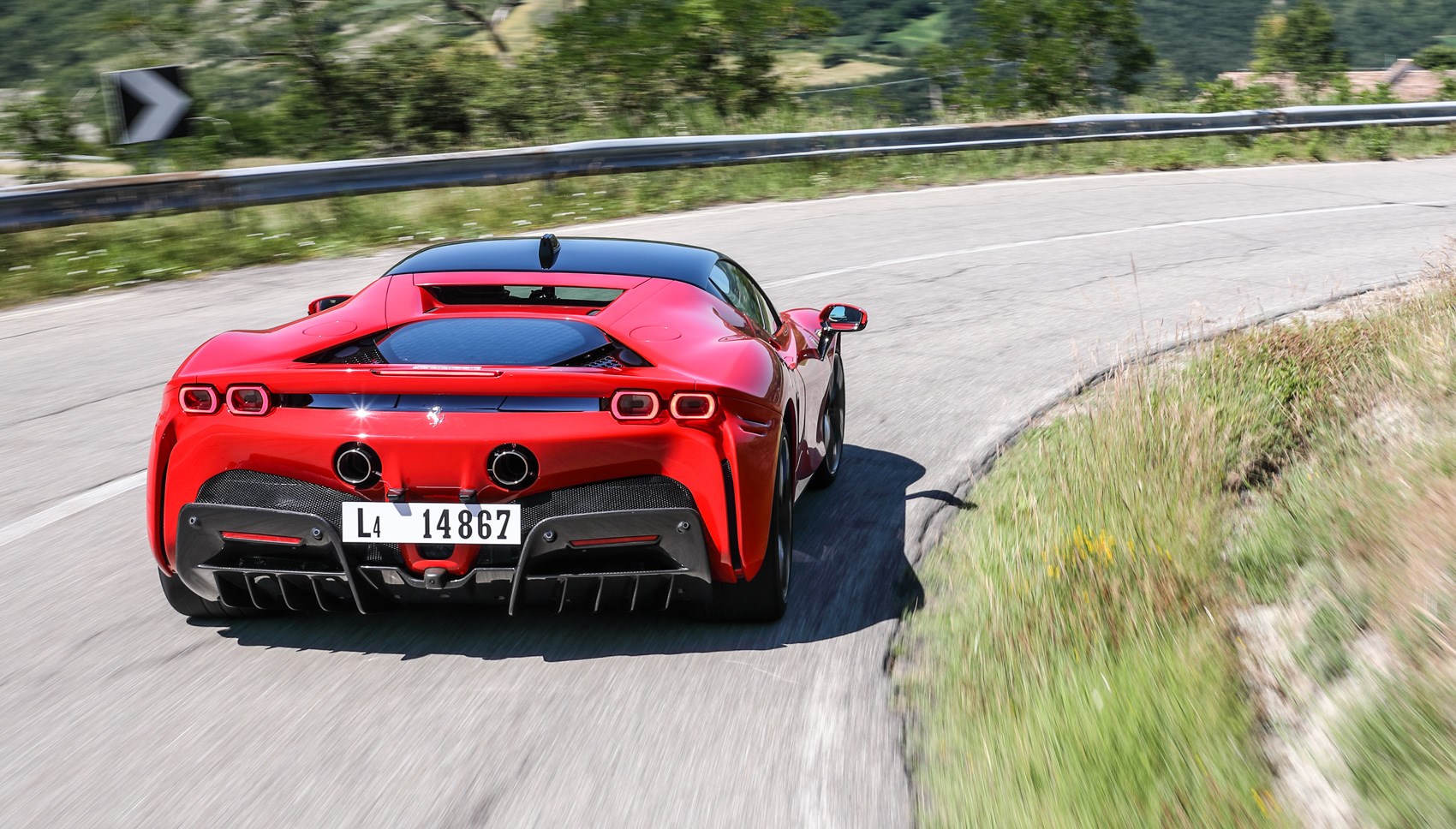 Mooch along in Hybrid mode in dawdling traffic and the SF90 feels like a proper GT, disguised as a 1000bhp hypercar. But it won’t feel like some people’s idea of a Ferrari. They’ll need Performance or Qualifying modes for that.

We weren’t. In Performance mode with the engine running full time and augmented by the electric powertrain, the F8’s already minimal turbo lag isn’t completely eradicated, but it’s damn close to it. Even from low engine revs the fourth and fifth gear go is colossal, and with all four wheels doing the work, traction is spectacular.

What about the 4WD bit?

The most obvious advantage, and one of the reasons Ferrari switched to four-wheel drive, is the ability to put 1000bhp to the ground. Traction is incredible. 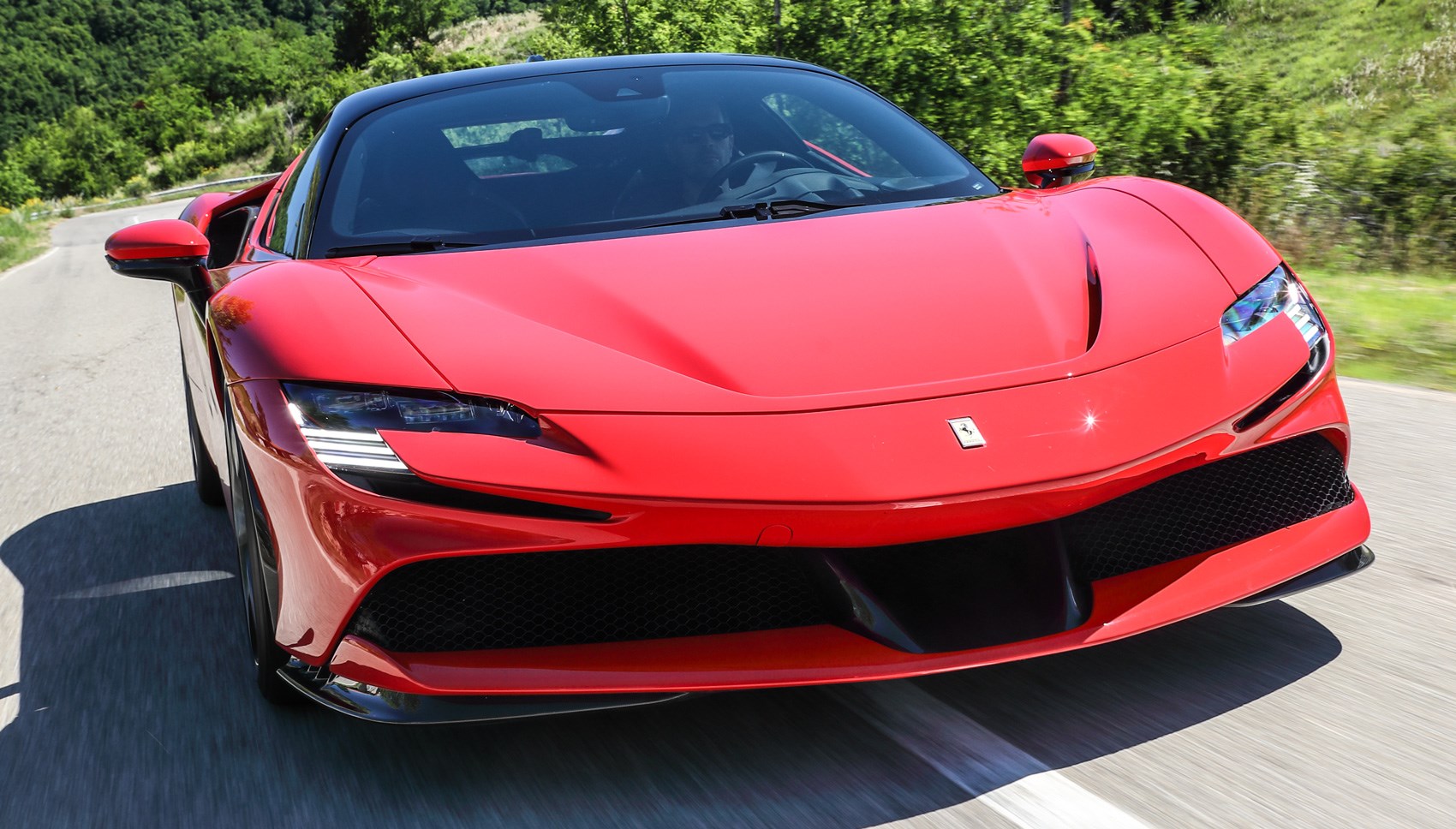 But that feeling of torque being fed to the front wheels, specifically coming out of very tight low-speed bends, takes some getting used to if you’re used to rear-drive Ferrari sports cars. Not pulling the car straight, exactly, but definitely pulling. That’s an unfamiliar sensation when you’re sitting in the cabin of a car that (fancy new widescreen TFT instrument pack aside), feels much like an F8 Tributo. At points, I wasn’t sure I’d have enjoyed the slower, simpler car less.

But on faster roads, and on Ferrari’s Fiorano circuit, the SF90 reveals its true genius. On track the ebb and flow of torque to the front wheels is less noticeable. Instead, you notice the extra steering precision and how well the chassis manages the disappointing, but inevitable, 240kg the 1570kg (damn near 1700kg in real terms) SF90 carries over the F8.

Race mode on the steering wheel-mounted manettino driving toggle delivers the kind of poise you want to start with to get comfortable in a car with this much power on a track you haven’t driven for a couple of years. It’s neat, precise and reassuring. No slip, no drama. Just a great opportunity to experience the performance in full. 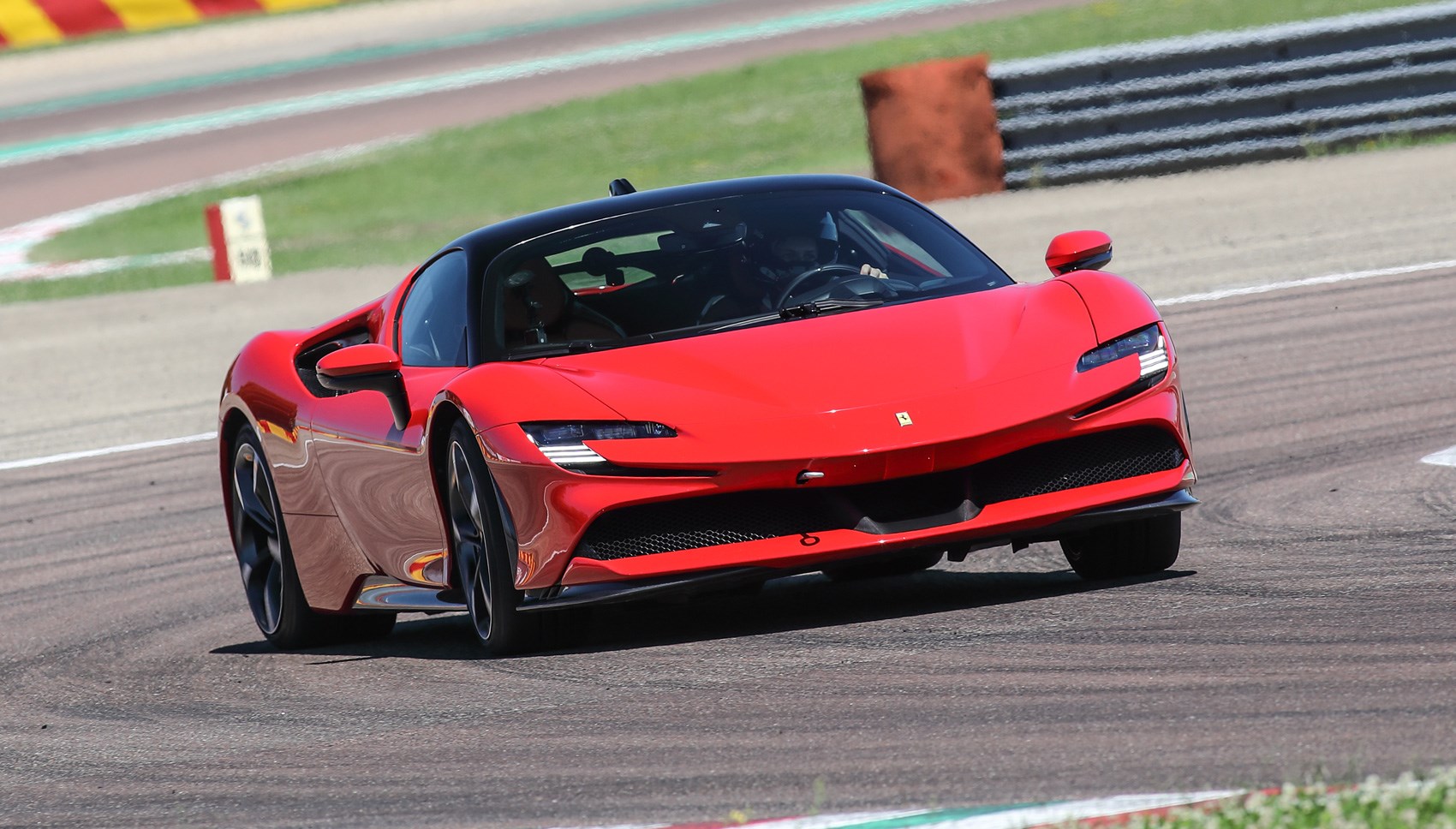 But CT(traction control)-off is more fun. It’s surprisingly oversteery (yeah, who’d have though it, eh?), but the breakaway is so gentle, and the chassis so flattering, you never feel remotely intimidated. Never mind the fact that it has 1000bhp. I’m struggling to think of any mid-engined car full-stop with the same ability to make a driver feel so comfortable at, and beyond, the limit.

Sounds great. Is there anything it doesn’t do?

The SF90’s other problem is luggage space. The huge front luggage bays of Ferrari’s sports cars has long been a real strength for owners who like to use their cars for more than a few minutes at a time. But the SF90’s electric powertrain componentry savages boot space. You get 200 litres in an F8, but just 74 in the SF90. Enough for a smallish squashy bag, but that’s about it. That’s a shame, given its GT chops. 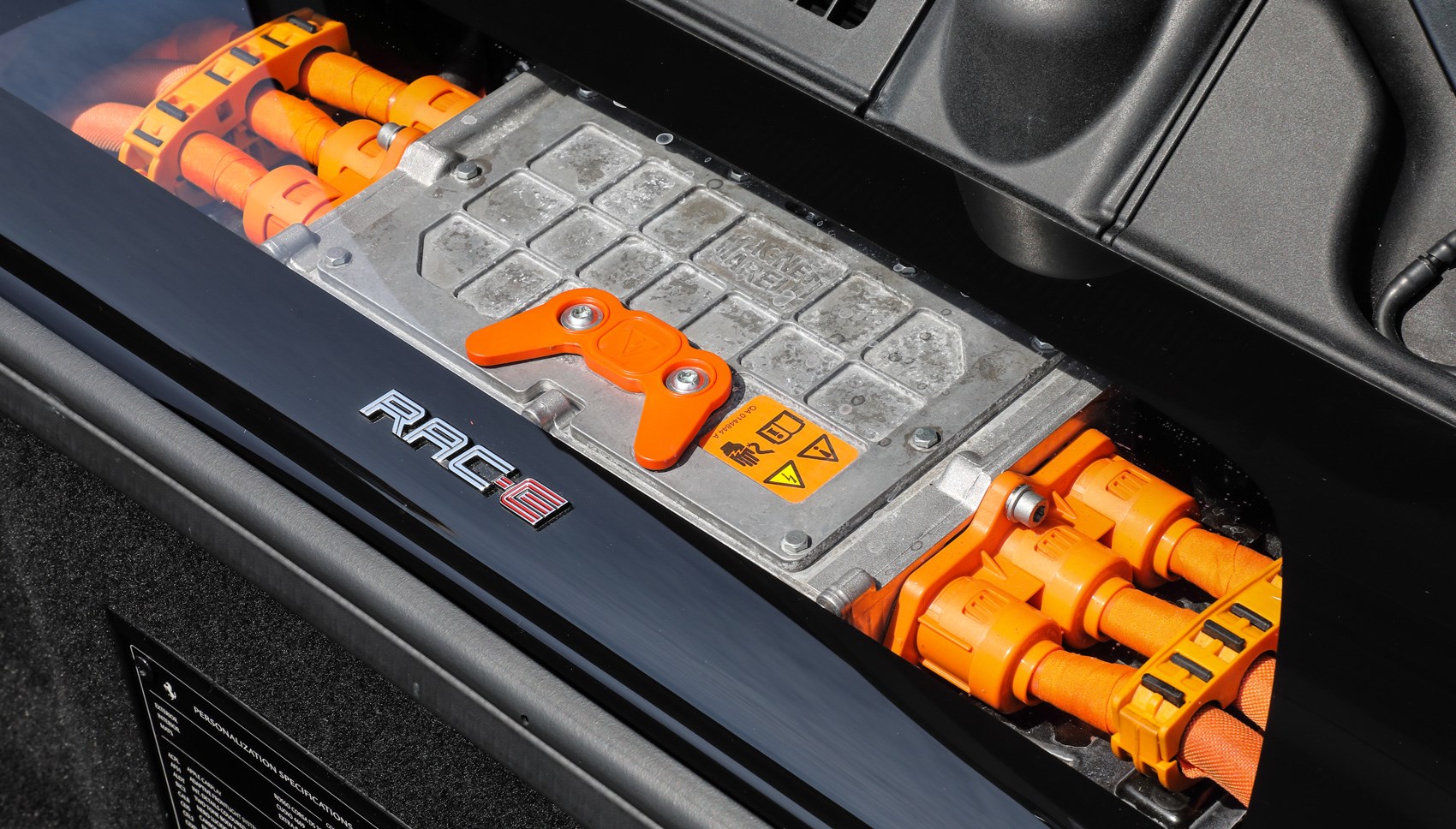 The SF90 is a complex car, and not just from a technical standpoint. It’s a car you struggle to do justice to in a couple of hours behind the wheel or a few hundred words of story.

And you can imagine plenty of people aren’t going to like it. If most people who buy supercars buy them to enjoy a concentrated hit of adrenaline on a brief Sunday drive what do they need with one that weighs 240kg more than an F8 and has an electric mode they don’t care about?

But it’s engineering like this that’s going to ensure the survival of the supercar when laws, and even the mindset of some owners, are changing to reflect a greater concern for the environment.

Fortunately, that’s not the only reason to love the fastest, most exploitable road-going Ferrari ever built. 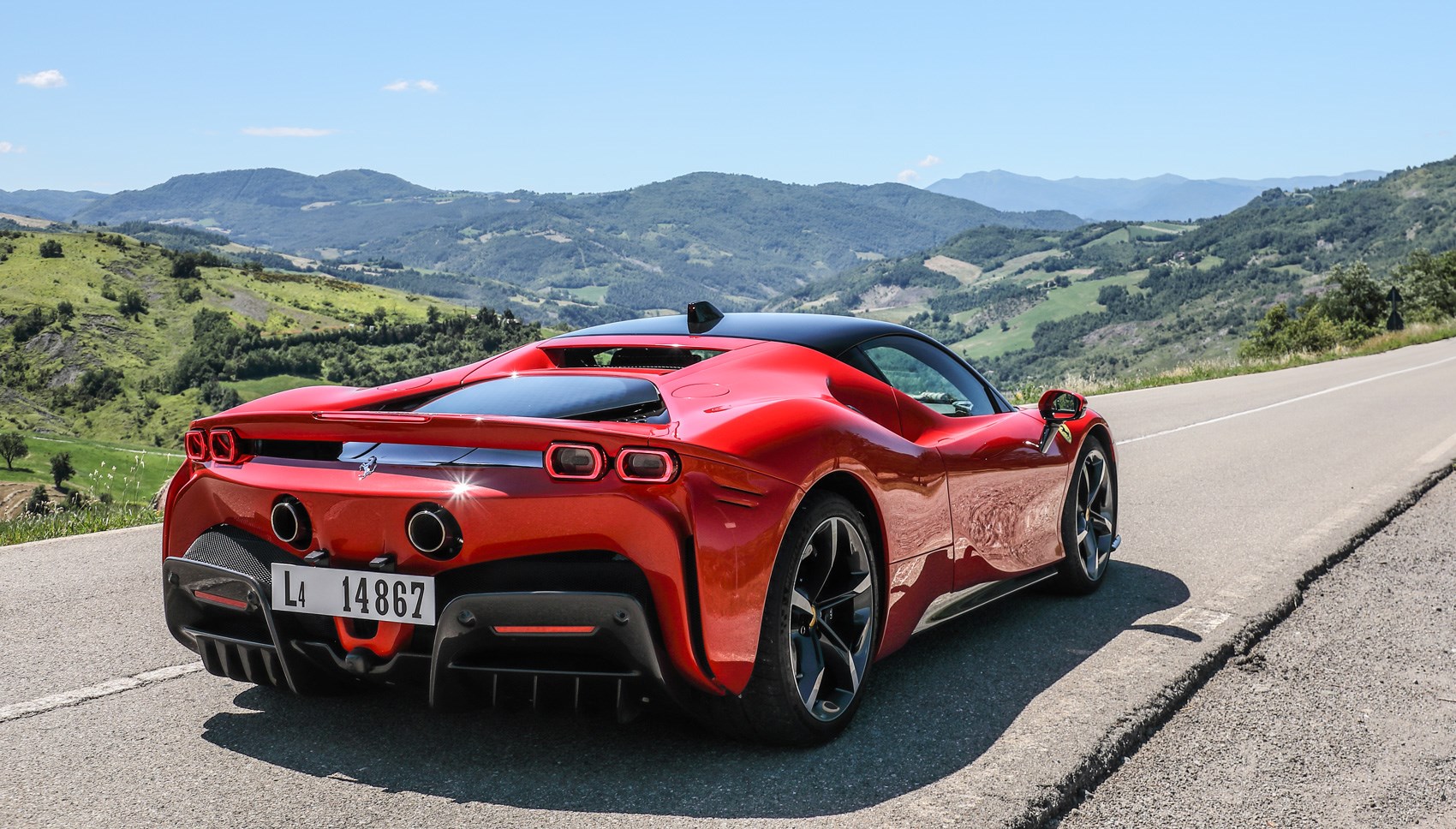 Anthony Efrat Follow I enjoy sharing my passion for the automotive car with love and also reading books about Cars, Racing, and the Automotive Hobby.
« Great Porsche 935 review
error: Content is protected !!